Meeple-Sized Reviews #5: This One is for the Birds

Welcome to another edition of Meeple-Sized Reviews – this time we look not only at two bird-themed games, but both of them are also family dexterity games.

The game is played with players having equal amount of plastic eggs. On their turn they draw these sort of super long toothpicks that have colors on both ends out of a tin cup (that also doubles as storage of the game). At the start of your turn, you just take any stick. If the colors on the end of the stick doesn’t match, you must draw again – this time though you must draw a stick that matches the end color of your previously drawn stick. You can draw up to three sticks trying to get a stick that matches the same color on both ends. If you fail after your third stick – you must place your sticks horizontal across the can and your turn ends. If at any point you draw a stick that matches on both ends, you place any sticks you have drawn to that point, plus the matching stick across the can horizontally and then you may place one of your eggs. If you ever start your turn with no eggs, you may try to place the Cuckoo bird meeple – if you can do it without causes eggs or sticks to fall (or the bird for that matter) – you win the game. Of course the game comes with a detailed rulebook about what happens, if a stick falls, if the table is bumped or if an egg falls out of the nest deeper into the can (you much taken an opponents egg). However, in all the details it covers, there is one that is not – what are legal ways to place the stick – do I have to do it with just one hand or can I use both? This is not covered in the rulebook, so it will have to be house ruled. 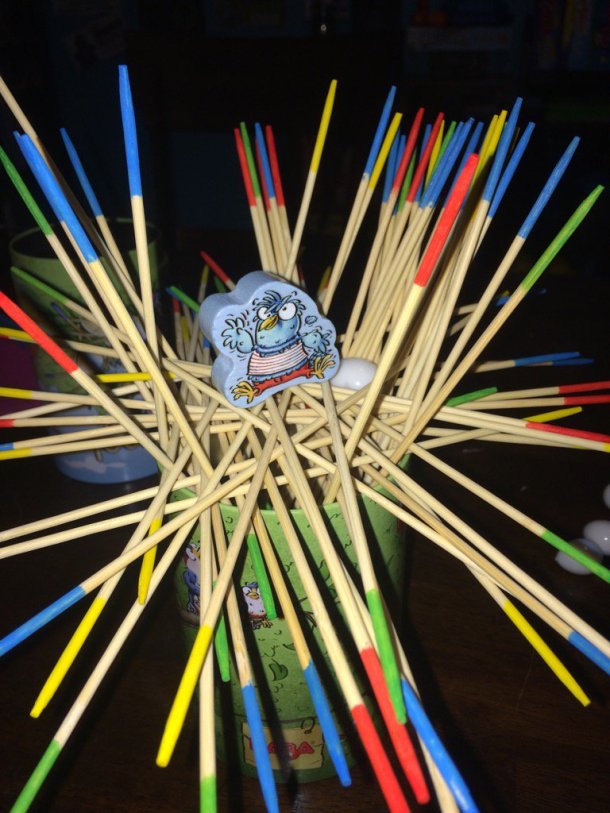 Go Cuckoo! can be found on HABA by click on this link 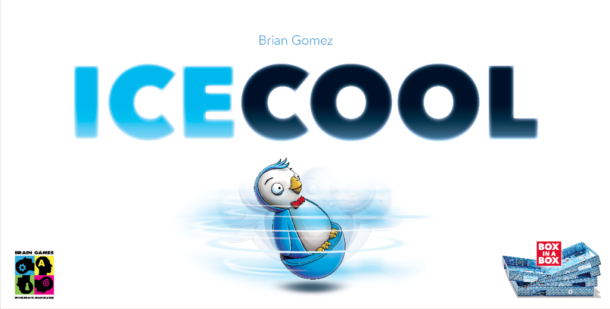 Ice Cool is a game that is much bigger than it originally looks by its box. That is because it is a box within a box, within a box, within a box, within a .. okay you get the point. You connect all these boxes to make a big board to well… flick penguins around a penguin school. The gameplay is this – on your turn 1 to 3 players are penguins trying to race around the board making it through certain doorways to collect the fish above them. Whenever you collect a fish you get a face-down card that can score you 1-3 victory points at the end of the game. First to collect 3 fish wins the round. However, that isn’t it. There is another round where a player is the hall monitor penguin – who is trying to catch the other penguins before they collect the fish. If at any point they tag all the penguins playing before the fish are collected – they win the round. To keep track of who you have tagged, when you tag them – you get to take their student id card – for every id card at the end of the round the hall monitor has he/she gets to draw from the VP deck. Once everyone has had a chance to play the hall monitor the game ends. Player with the most VP wins. There are of course special 2-player rules, and there is a way to take an extra turn, etc but this is the overall gist of the game. 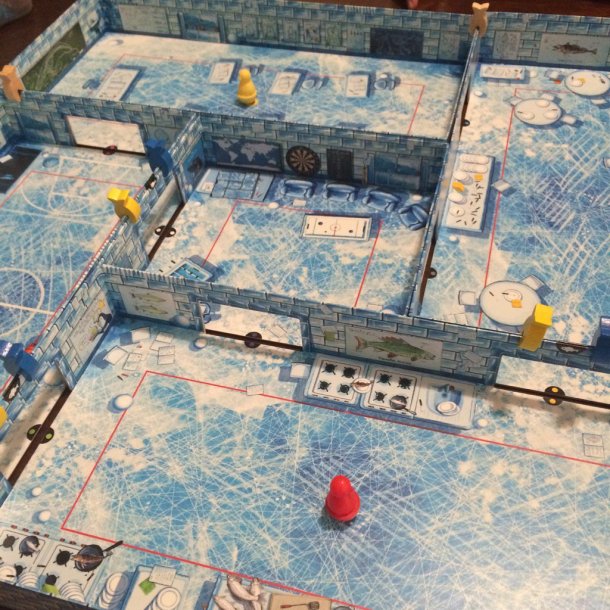 The components in this game are great. The whole box within a box is cool and actually works well. The rules are well written, and the penguins you flick work really great in this game. You are supposed to be able to use great precision with your flicking, its movement affected by where you flick it – but I wouldn’t know, I am horrible at flicking. Also, let me make note something really cool about the colored ID cards. They are double sided, with each side featuring the opposite sex. So no matter what color you are –you can be male or female. This is something I hope other publishers take note of; it is a very nice touch.

Is it fun? Well, let me put it this way – whenever my kids that get a chance to play it (even one of my older daughters who doesn’t typically like board game) not only do they want to play Ice Cool, they themselves will set it up waiting to play with one of the adults in the house. They are in love with the game. What do the adults think? They too have a lot of fun with this game. Ice Cool really is a great family game for ages 7 or so and up. For anyone looking for a new dexterity game or even a really (ice) solid family game, you don’t have to look any further than Ice Cool.

It Came From the 90s

This site uses Akismet to reduce spam. Learn how your comment data is processed.